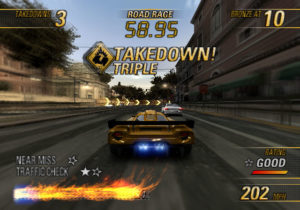 
World Tour: Compete against other cars in different varieties of modes (see below). The tour is divided by car types. Get a medal (Gold: 1st place, Silver: 2nd place, Bronze: 3rd Place) in a series to unlock Grand Prix. Finish gold in the GP to unlock next World Tour series. World Tour is the primary way to unlock cars.
Race: Race against up to four cars (world tour default is 4) in a 3 lap race on any track.
Eliminator: (Only accessible in world tour) Same as a race, only on each lap the lowest ranking car is eliminated. Race goes until one winner is left.
Face-Off: Race against a legend car to win it.
Time Attack: Race against the clock. The goal is to complete a lap as fast as possibly. The player can do as many laps as they like. 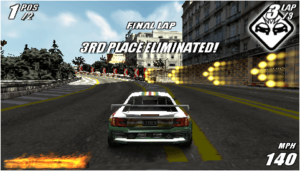 There are a total of 95 cars to unlock through the various classes – these are Compact, Muscle, Coupe, Sport, and Super.
There is also the Race Special and Heavyweight classes. Some cars can also be unlocked by completing achievements. The cars featured in the game are from Burnout 2 and 3.
The game also has Collector’s cars. There are five collector cars for each class, however the player only starts out with just one.
The player has to challenge another player on a Wi-Fi battle mode, betting their collector car against theirs and win their car in the challenge (the Collector’s cars are exclusive for the PSP version) 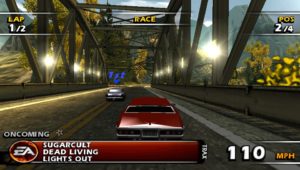 Burnout Legends soundtrack contains 21 songs from artists such as Yellocard, Junkie XL and Nine Black Alps. The same songs also appeared in Burnout Revenge.
Some songs featured in the game’s soundtrack have been censored to conform with the games young age rating.